Trending:Boeing says its composites R&D center will be turned to other purposes, ending an era

As part of its vauntedleadership principles, Amazon likes to say it starts with the customer and works backwards to shape its business and products. Jeff Bezos is finding that the mantra has its limits.

“Dave, you’re the kind of customer I’m happy to lose,” the Amazon CEOwrote on Instagram this weekendafter posting a profane, racist email message from a customer whose last name was blacked out from the screenshot.

There have been a number of sickening but not surprising responses in my inbox since my last post. This sort of hate shouldn’t be allowed to hide in the shadows. It’s important to make it visible. This is just one example of the problem. And, Dave, you’re the kind of customer I’m happy to lose.

“This sort of hate shouldn’t be allowed to hide in the shadows,” Bezos wrote. “It’s important to make it visible. This is just one example of the problem.”

Bezos called it an example of “a number of sickening but not surprising” messages following a separate email exchangehe had posted Fridayin response to another customer who objected to the message of support for Black Lives Matter at the top of Amazon.com. 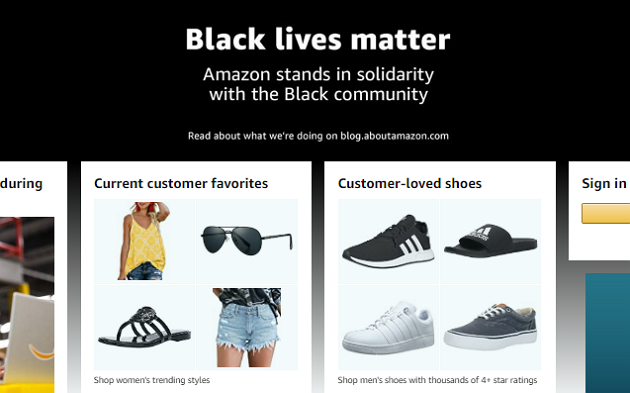 The company last weekannounced $10 million in donationsto groups supporting social justice and equity issues, including the ACLU Foundation, National Museum of African American History and Culture, and the NAACP.

Amazon has faced criticism from the ACLU and others over the use of its facial recognition technology by law enforcement, including the potential for the technology to misidentify people of color.At its recent annual meeting, the company opposed several shareholder proposals related to gender and race in its workforce and products, outlining its progress in those areas and saying it already has programs in place to address such issues.

Critics also point out Amazon’s lack of diversity in leadership roles; the company’s executive suite and board of directors have been mostly white over the years. Last year, Rosalind Brewer, the Starbucks chief operating officer, became thefirst black woman to serve on the board since the late 2000s.

亚马逊员工的组织气候居stice slammed Amazon for firing Chris Smalls, a black warehouse worker who organized a walkout to demand broader protections from the coronavirus. The group accused Amazon of racism after an executive memo seeking to discredit Smalls as “not smart or articulate” leaked to the press.

Amazon says Smalls was terminated not for organizing a protest but “for putting the health and safety of others at risk and violations of his terms of his employment,” saying he had received warnings for violating social distancing guidelines.

The messages from Bezos in response to the latest customer emails iswinning support from other Amazon customers.

Bezosused a similar approach on a separate issue last year, publishing letters he received from American Media Inc., publisher of the National Enquirer, and accusing the publication of blackmail and extortion over its threat to publish compromising photos it had obtained of him.